The gallery in this post shows the development of the first phase of the Earth Antenna in my workshop in Rabòs during the final year of the MA – specifically April – July 2013.

At this time the Earth Antenna machine was being designed as a telescopic structure whose base unit contained the reservoir of mud-starch substrate which was pumped up to the revolving extrusion-head up to a maximum height of around 3 metres. It was built from wood to break away from the unchallenged notion that machines should be inorganic and untraditional looking.

The design is different now, since the entire mechanism is based on a single droid-like machine which climbs up its tower as it makes it – there is no supporting structure other than the tower itself. 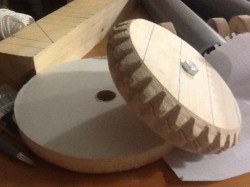