In this tutorial we will learn:

This is called our setup method. It’s where we ‘set up’ our program. Here, we’re using it to start serial communication from the Arduino to our computer at a baud rate of 9600. For now, all you need to now about baud rate is that (basically) it’s the rate at which we’re sending data to the computer, and if we’re sending and receiving data at different rates, everything goes all gobbledy-gook and one side can’t understand the other. This is bad.

After our setup() method, we need a method called loop(), which is going to repeat over and over as long as our program is running. For our first example, we’ll just send the string ‘Hello, world!’ over the serial port, over and over (and over). Type the following in your Arduino sketch, below the code we already wrote:

That’s all we need for the Arduino side of our first example. We’re setting up serial communication from the Arduino and telling it to send data every 100 milliseconds. Your Arduino sketch should now look something like this: 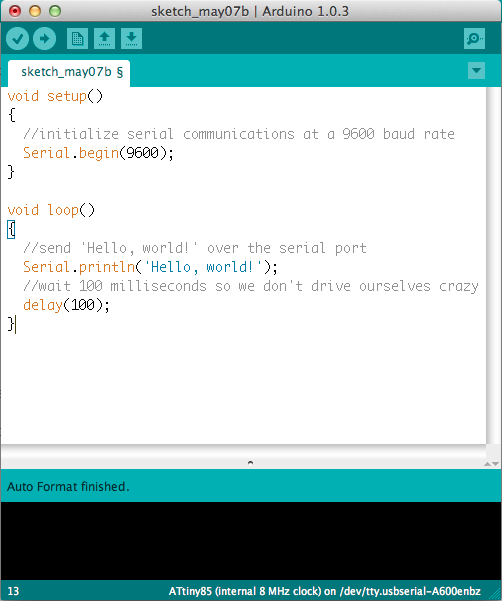 All that’s left to do is to plug in your Arduino board, select your board type (under Tools -> Board Type) and your Serial port (under Tools -> Serial Port) and hit the ‘upload’ button to load your code onto the Arduino.

Now we’re ready to see if we can magically (or through code) detect the ‘Hello, world!’ string we’re sending from Processing.

Our task now is to find a way to listen in on what our Arduino sketch is sending. Luckily, Processing comes with a Serial library designed for just this kind of thing! If you don’t have a version of Processing, make sure you go to Processing.org and download the latest version for your operating system. Once Processing is installed, open it up. You should see something like this: 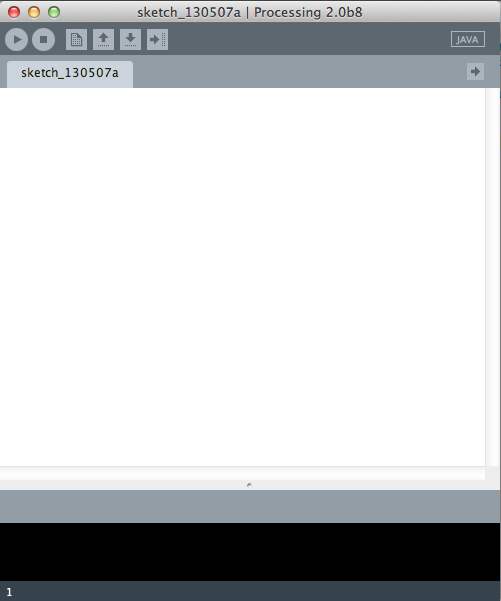 Looks a lot like Arduino, huh? The Arduino software was actually based in part off of Processing – that’s the beauty of open-source projects. Once we have an open sketch, our first step is to import the Serial library. Go to Sketch->Import Library->Serial, as shown below: 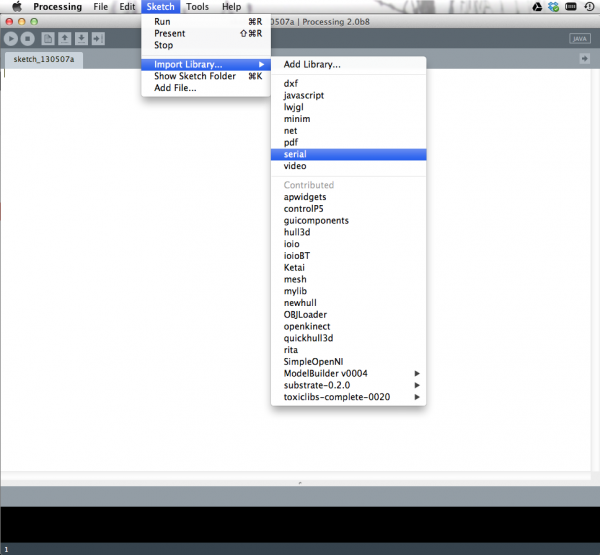 You should now see a line like import processing.serial.*; at the top of your sketch. Magic! Underneath our import statement we need to declare some global variables. All this means is that these variables can used anywhere in our sketch. Add these two lines beneath the import statement:

In order to listen to any serial communication we have to get a Serial object (we call it myPort but you can it whatever you like), which lets us listen in on a serial port on our computer for any incoming data. We also need a variable to recieve the actual data coming in. In this case, since we’re sending a String (the sequence of characters ‘Hello, World!’) from Arduino, we want to receive a String in Processing. Just like Arduino has setup() and loop(), Processing has setup() and draw()(instead of loop).

For our setup() method in Processing, we’re going to find the serial port our Arduino is connected to and set up our Serial object to listen to that port.

Remember how we set Serial.begin(9600) in Arduino? Well, if we don’t want that gobbledy-gook I was talking about, we had better put 9600 as that last argument in our Serial object in Processing as well. This way Arduino and Processing are communicating at the same rate. Happy times!

In our draw() loop, we’re going to listen in on our Serial port and we get something, stick that something in our val variable and print it to the console (that black area at the bottom of your Processing sketch).

Ta-Da! If you hit the ‘run’ button (and your Arduino is plugged in with the code on the previous page loaded up), you should see a little window pop-up, and after a sec you should see `Hello, World!‘ appear in the Processing console. Over and over. Like this: 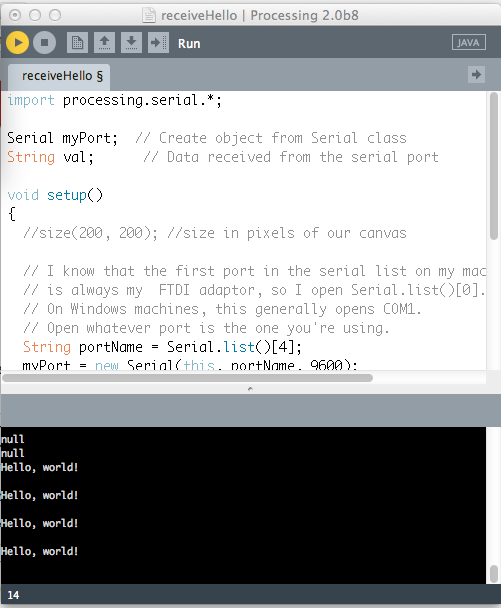 Excellent! We’ve now conquered how to send data from Arduino to Processing. Our next step is figure out how go the opposite way – sending data from Processing to Arduino.

So we’ve sent data from Arduino to Processing, but what if we want to send data the other way – from Processing to Arduino? Piece of cake!

Let’s start with the Processing side of things. It starts out much like our last sketch: we import the Serial library and declare a global Serial object variable for our port up top, and in our setup() method we find our port and initialize Serial communication on that port with our Serial variable at 9600 baud. We’re also going to use the size() command, to give us a little window to click in, which will trigger our sketch to send something over the Serial port to Arduino.

In our draw() loop, we send whatever we want over the serial port by using the write method from the Processing Serial library. For this sketch, we will send a ‘1’ whenever we click our mouse in the Processing window. We’ll also print it out on the console, just to see that we’re actually sending something. If we aren’t clicking we’ll send a ‘0’ instead.

This is what your code should look like at this point: 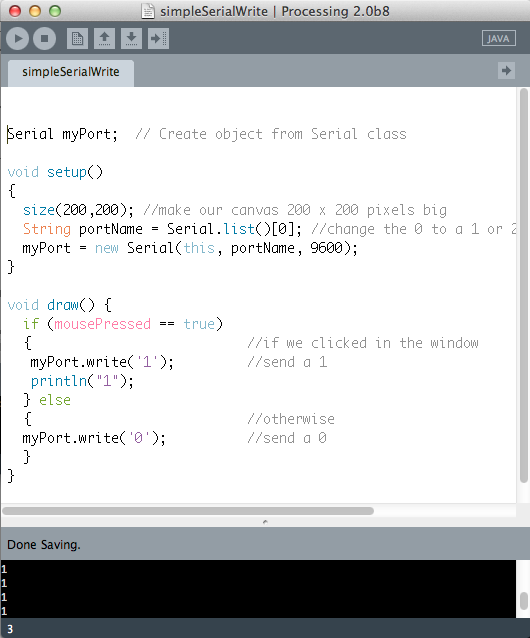 If you run this code, you should see a bunch of 1’s appear in the console area whenever you click your mouse in the window. Neat! But how do we look for these 1’s from Arduino? And what can we do with them?

Ok! On this page we’re going to look for those 1’s coming in from Processing, and, if we see them, we’re going to turn on an LED on pin 13 (on some Arduinos, like the Uno, pin 13 is the on-board LED, so you don’t need an external LED to see this work).

At the top of our Arduino sketch, we need two global variables – one for holding the data coming from Processing, and another to tell Arduino which pin our LED is hooked up to.

Next, in our setup() method, we’ll set the LED pin to an output, since we’re powering an LED, and we’ll start Serial communication at 9600 baud.

This is what your code should look like when you’re done: 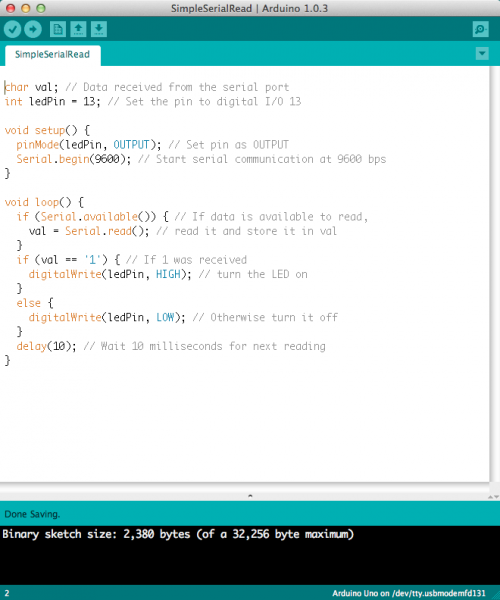 On this page and the next, we’re going to combine our two previous examples in such a way that Processing can both receive ‘Hello, world!’ from Arduino AND send a 1 back to Arduino to toggle an LED. Of course, this also means that Arduino has to be able to send ‘Hello, world!’ while listening for a 1 from Processing. Whew!

Let’s start with the Arduino side of things. In order for this to run smoothly, both sides have to know what to listen for and what the other side is expecting to hear. We also want to minimize traffic over the serial port so we get more timely responses.

Since we’re trying to be efficient, we’re going to change our code so that we only listen for 1’s, and each time we hear a ‘1’ we toggle the LED on or off. To do this we added a boolean (true or false) variable for the HIGH or LOW state of our LED. This means we don’t have to constantly send a 1 or 0 from Processing, which frees up our serial port quite a bit.

Our setup() method looks mostly the same, with the addition of an establishContact() function which we’ll get to later – for now just type it in.

In our loop function, we’ve just combined and slimmed down the code from our two earlier sketches. Most importantly, we’ve changed our LED code to toggle based on our new boolean value. The ‘!’ means every time we see a one, we set the boolean to the opposite of what it was before (so LOW becomes HIGH or vice-versa). We also put our ‘Hello, world!’ in an else statement, so that we’re only sending it when we haven’t seen a ‘1’ come in.

Now we get to that establishContact() function we put in our setup() method. This function just sends out a string (the same one we’ll need to look for in Processing) to see if it hears anything back – indicating that Processing is ready to receive data. It’s like saying ‘Marco’ over and over until you hear a ‘Polo’ back from somewhere. 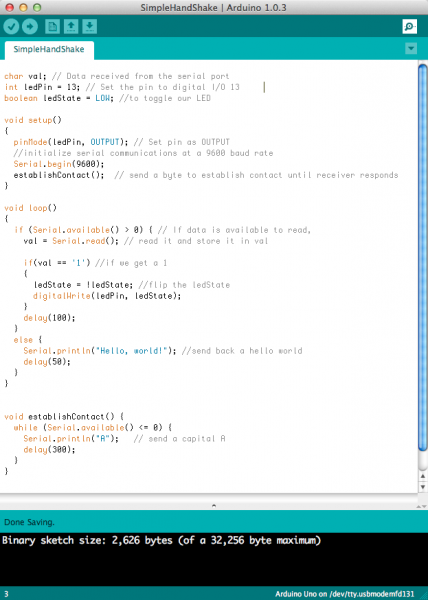 That’s it for the Arduino side, now on to Processing!

For the Processing side of things, we’ve got to make a few changes. We’re going to make use of the serialEvent() method, which gets called every time we see a specific character in the serial buffer, which acts as our delimiter – basically it tells Processing that we’re done with a specific ‘chunk’ of data – in our case, one ‘Hello, world!’.

The beginning of our sketch is the same except for a new firstContactboolean, which let’s us know when we’ve made a connection to Arduino.

Our setup() function is the same as it was for our serial write program, except we added the myPort.bufferUntil('\n'); line. This let’s us store the incoming data into a buffer, until we see a specific character we’re looking for. In this case, it’s a carriage return (\n) because we sent a Serial.println from Arduino. The ‘ln’ at the end means the String is terminated with a carriage return, so we know that’ll be the last thing we see.

Because we’re continuously sending data, our serialEvent() method now acts as our new draw() loop, so we can leave it empty:

Now for the big one: serialEvent(). Each time we see a carriage return this method gets called. We need to do a few things each time to keep things running smoothly:

That’s a lot of steps, but luckily for us Processing has functions that make most of these tasks pretty easy. Let’s take a look at how it all breaks down:

Oof. That’s a lot to chew on, but if you read carefully line by line (especially the comments), it’ll start to make sense. If you’ve got your Arduino code finished and loaded onto your board, try running this sketch. You should see ‘Hello, world!’ coming in on the console, and when you click in the Processing window, you should see the LED on pin 13 turn on and off. Success! You are now a serial handshake expert.

In developing your own projects with Arduino and Processing, there are a few ‘gotchas’ that are helpful to keep in mind in case you get stuck. 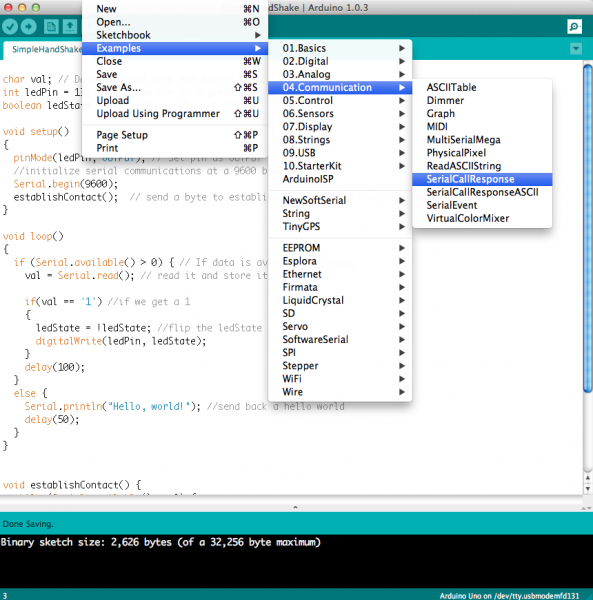 Now that you know how to send data from Arduino to Processing and back again (even simultaneously!), you’re ready for some seriously cool projects. By hooking together Arduino and Processing, you can do things like visualize sensor data in real-time, or make a glove with flex sensors in the fingers that makes penguins appear on the screen, or a command console from Processing that controls a giant array of LEDs.

Here are a few useful links that you may find useful going forward: